Treatment with CDNF (Cerebral Dopamine Neurotrophic Factor) aims to modify the progression of Parkinson’s disease and to provide symptomatic relief. However, as this is a first-in-human study, the primary objectives are safety and tolerability.

The Treatment period 2 is being conducted under a separate Extension study protocol which also has been approved both in Finland and Sweden by the regulatory authorities and ethics committees.

Participation in the study may also be stopped at any time by the responsible doctor on medical grounds.

The following version for the Extension study Informed Consent Form is currently available:

The study drug is called CDNF (Cerebral Dopamine Neurotrophic Factor). It is a protein, which is found naturally in the body. In this study, its potential to prevent dopamine neuron degeneration and to stimulate neuron regeneration are being studied. As CDNF is a protein, it cannot be given as a pill or an injection as the body will not transport it to the brain. Therefore, in this study, CDNF is given using a drug delivery system, which has been implanted into the brain by a neurosurgeon.

CDNF has not been studied previously in humans. In the initial study, CDNF is compared to a placebo product in a 2:1 ratio. Patients are randomly assigned to either placebo, CDNF mid-dose or CDNF high-dose groups. After six months of treatment in the initial study (Treatment period 1), patients are offered to participate in an extension study in which all patients receive the active CDNF drug (Treatment period 2).

The CDNF drug is delivered to the brain via catheters, which are implanted by neurosurgeons in the putamen area of the brain. The catheters are connected to a port, which is fixed to the head, just behind the ear. The system also includes filters, which prevent bacteria and air from entering the brain.

This investigational drug delivery system has been previously implanted in more than forty patients in another clinical study.

Figure 1. Drug delivery device used in the study. (A) Location of different components after implantation surgery are shown. (B) Close-up view of the port structure. (C) Device in dosing mode, connected to the application set for drug dosing. List of components: 1 = transcutaneous skull-anchored port, 2 = subcutaneous lines connecting the port to the catheters, 3 = catheter entry sites (x4), the brain-dwelling parts of catheters are not shown, 4 = application set attached to the port [external infusion lines (not shown) will be connected to the application set for dosing].
BACK TO TOP

The seventeen patients, who have been enrolled in the study have met the following criteria:

A patient’s eligibility to join the study has been assessed in detail during the screening phase at the start of the study.

Those patients who have not met the criteria for participation have been informed of the reasons, and they have continued to receive the same healthcare as they would normally receive.

How is the study conducted?

On several visits, patients are asked not to take their Parkinson’s medication for at least ten hours prior to your appointment. Patients can take their usual medication as soon as the assessments have been completed.

Patients need to stay in the hospital or a hotel several times during the study, mostly one night but after the surgery for about four nights. 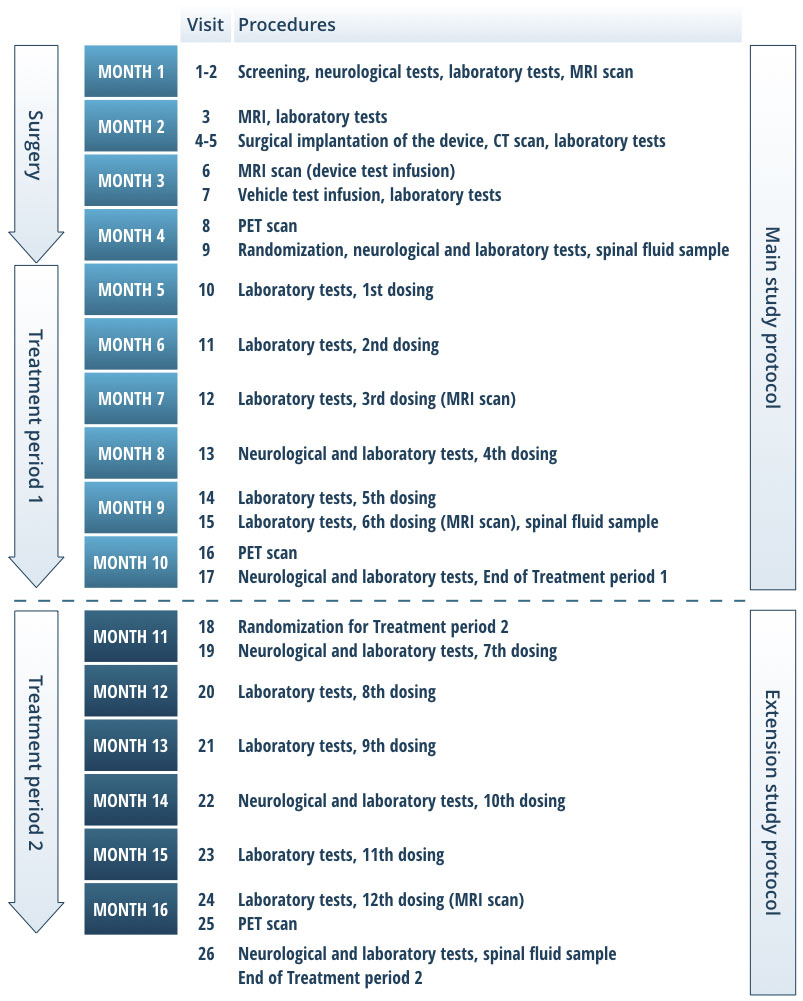 Figure 2. Study timeline and procedures per visit. The clinical study is composed of two studies performed under two different study protocols and patient consents. The first part of the study includes the device surgery and Treatment period 1. The second part includes Treatment period 2. After the Treatment period 2, the device will be closed from further access by removing the port. Alternatively, the entire device may be explanted.

Are there any restrictions during the study?

Are there alternatives to the study treatment?

The study doctor discusses with patients other available treatments, including their benefits and risks. Participation in the study does not influence the usual treatment of Parkinson’s and patients may continue with their current medication. However, treatment with other investigational study drugs or investigational medical devices is not permitted during this study. There are also medications that may not be used during this study. The study doctor discusses these medicines in detail with all participating patients.

What are the possible risks or discomforts?

What are the potential benefits?

The purpose of this study is to evaluate the safety and tolerability of CDNF and the implanted drug delivery system. A potential positive treatment effect on the symptoms of Parkinson’s disease will be evaluated, however, it is not known if the study patients will have any benefit from the treatment. Data from this study may in the future benefit people with Parkinson’s.

After the study concludes

The study doctor will discuss the best care for patients in a timely manner before the end of the study. Patients will be informed about the options available for optimal treatment of their condition. The drug delivery device port behind the ear will be removed. The implanted drug delivery system will be left in place in the brain, unless otherwise decided by the study doctor or at the patient’s request.

What happens if relevant new information becomes available during the trial?

How is personal data handled?

All study data are confidential and will be processed using only a code number. The study doctor will keep a code list in which the patients’ code numbers are linked to personal details, such as name and date of birth.

The study results may be published in medical journals and presented in scientific conferences, meetings and seminars. However, the identity of patients will not be revealed in any such report or presentation. For specific purposes, information may be transferred to regulatory authorities and to organizations cooperating with the study sponsor.

If a patient decides to leave the study prematurely, the data that has been collected before the withdrawal of the consent will be used in the evaluation of the study.

In order to confirm that the study has been duly conducted and to confirm the data collected about patients is correct, certain authorised people may have access to the medical records of the patients of the study. An authorised representative of the regulatory authority or the ethics committee may require access to the patients medical records in order to verify that the study has been duly carried out.

The hospital has received funding from the European Commission to perform this study. All patients’ participation costs will be covered, including travel to appointments and possible losses of income for the time spent at the study visits.